A Poetry of Concrete | Nariwa Museum

We would like to present a series of photographs documenting Nariwa Museum 成羽美術館, located in the rural area of Bitchū-Takahashi 備中高梁 in Okayama Prefecture 岡山県, not only known for its vastly mountainous landscape and ancient castles, but also for an impressive list of art museums scattered all over the prefecture.

Completed in 1994, Nariwa Museum was constructed in honour of a local-born artist Kojima Torajirō 児島 虎次郎. After a 90-minute journey in the rain departing from Okayama station, the first thing that struck me while arriving on site was the peculiarity of its location, I failed to conjure up a better phrase in describing it, literally in the middle of nowhere, vast, open and there it was. But don’t let the cynicism get ahold of you so quickly, I thought, and I was right, one may only be able to fathom why once you open up and embrace the museum together with its surroundings.

Walking up a set of stairs upon arrival, the towering unadorned concrete walls of the museum, amplified by the grandiose glass windows, its physical presence would hit you instantly. The sky started to clear up as if the piercing lines of the exterior facade of the building sliced through the clouds. The architecture is here stating its existence, like it’s announcing to the visitors who came a long way that you’ve come to the right place, it stands tall and firm in front of everyone acting as a reminder to all that this is also in fact, an area of historical significance and archaeological interests. Make no mistake, this is distinctively Tadao Ando 安藤忠雄, the industry’s colossal titan and whom, had probably shaped my very early impression of modern Japanese architecture – the minimal, the grey and the sharp edges. However Ando’s works are never about taking-overs, on the contrary where, another penetrating theme constantly reoccurring in the master’s works, is the unmasking of the environment enveloping the architecture.

Whilst at first your gaze would unquestionably gravitate towards the subject in question, as you roam around and listen to this geometric poetry sang by the architect, shrouded and elaborated by nature, you see that the building’s hard edges are relieved by the tranquil waters and mountains, the soft grey of concrete captures the spring greeneries beautifully like a moving painting. No wonder why Hiroshi Senju 千住 博, an abstract expressionist and Nihonga 日本画 (Japanese-style painting) master known for his minimalistic approach and ancient Japanese painting techniques, chose this particular venue for his works to be exhibited. Once out of the exhibition hall on either floor, you are greeted by an open space encircled by a transitional concrete slope, the shadows and natural light dance gently on the still water garden reflection – a perfect epitome of the entire museum I felt.

Situated just a few feet away from the main building, a museum’s public bathroom in general may sometimes be neglected by the visitors or even the architect, but this was surely not the case for Nariwa. A reprise collaboration between Ando and the artist Shuji Mukai 向井 修二, where the latter painted the entire bathroom using his signature ‘Symbols’, it reminded me of a book written by Jun’ichirō Tanizaki 谷崎 潤一郎 called [In Praise of Shadows] that I read during university years, not about the art but traditional Japanese toilet, wherein Tanizaki described it as ‘a place truly of spiritual repose’. The bathroom at Nariwa is most definitely not a traditional one that sits inside an impeccable Kyoto 京都 temple, but certain parallels can be drawn here. It might be weird to call a public toilet ‘elegant’, but the aesthetic that it carries is in perfectly harmonious consistency with the museum architecture itself. Being partially open, while hearing the rustling leaves and birds chirping, the experience of going to a public toilet apparently, is no longer a dreadful one.

Standing in front of the running water garden outside partly enfolding the museum and staring at its crystal-clear reflection, as if mist and fairies would start to emerge from the rain-soaked soil and the grove of trees. I was glad that I made myself out here in the middle of nowhere, to be able to escape from a sterile life during the pandemic along with all the chambers of information, to witness this concrete magic. 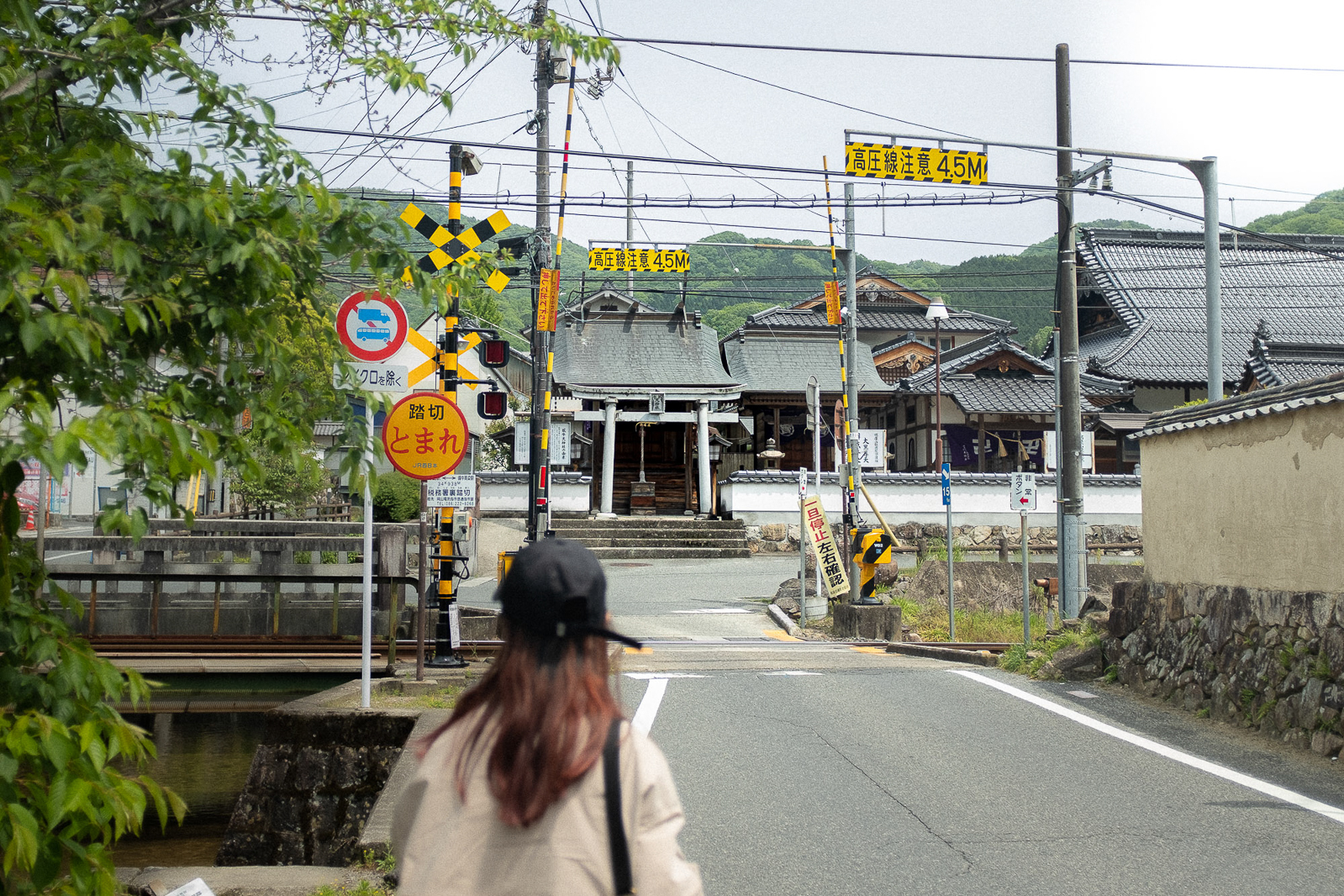 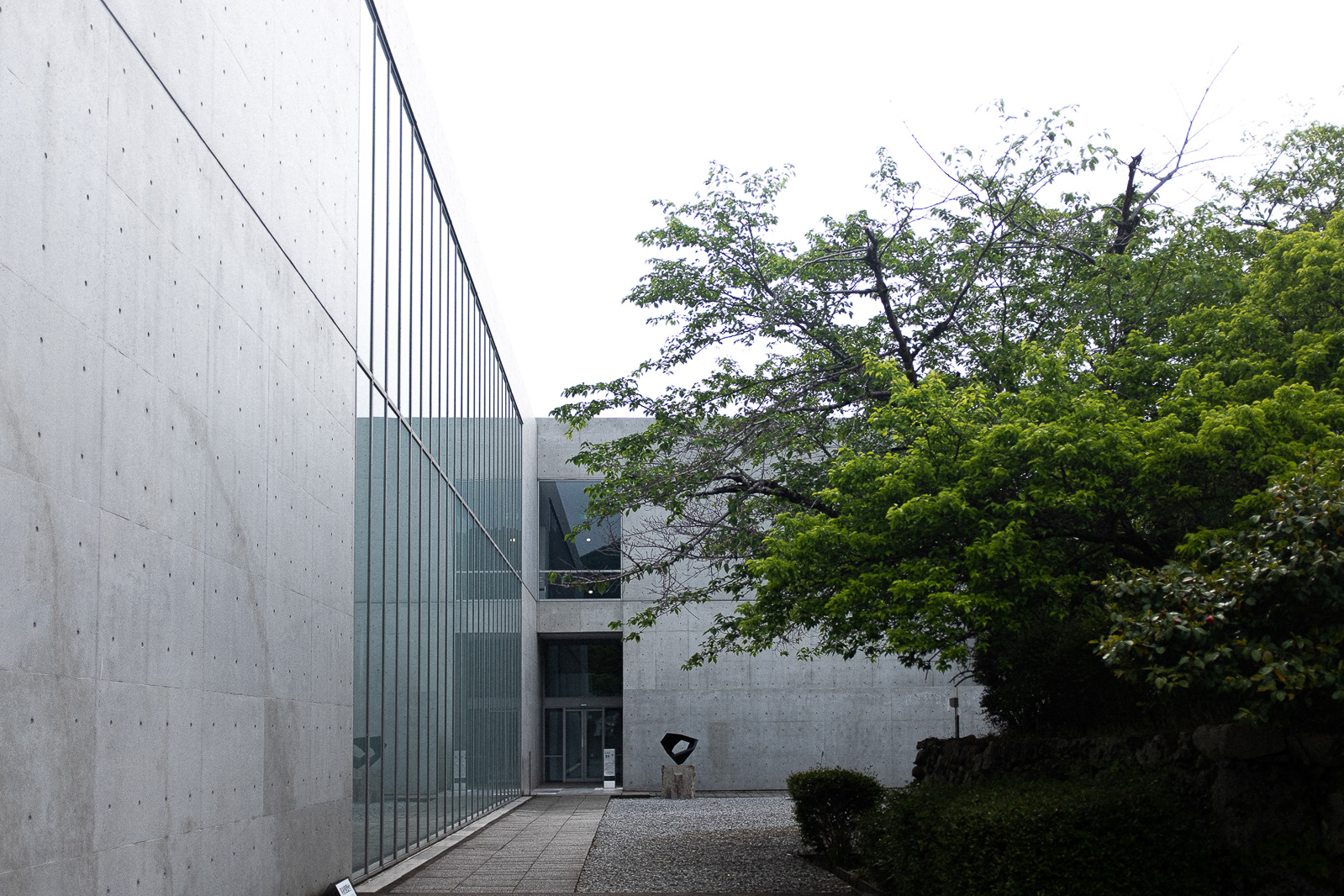 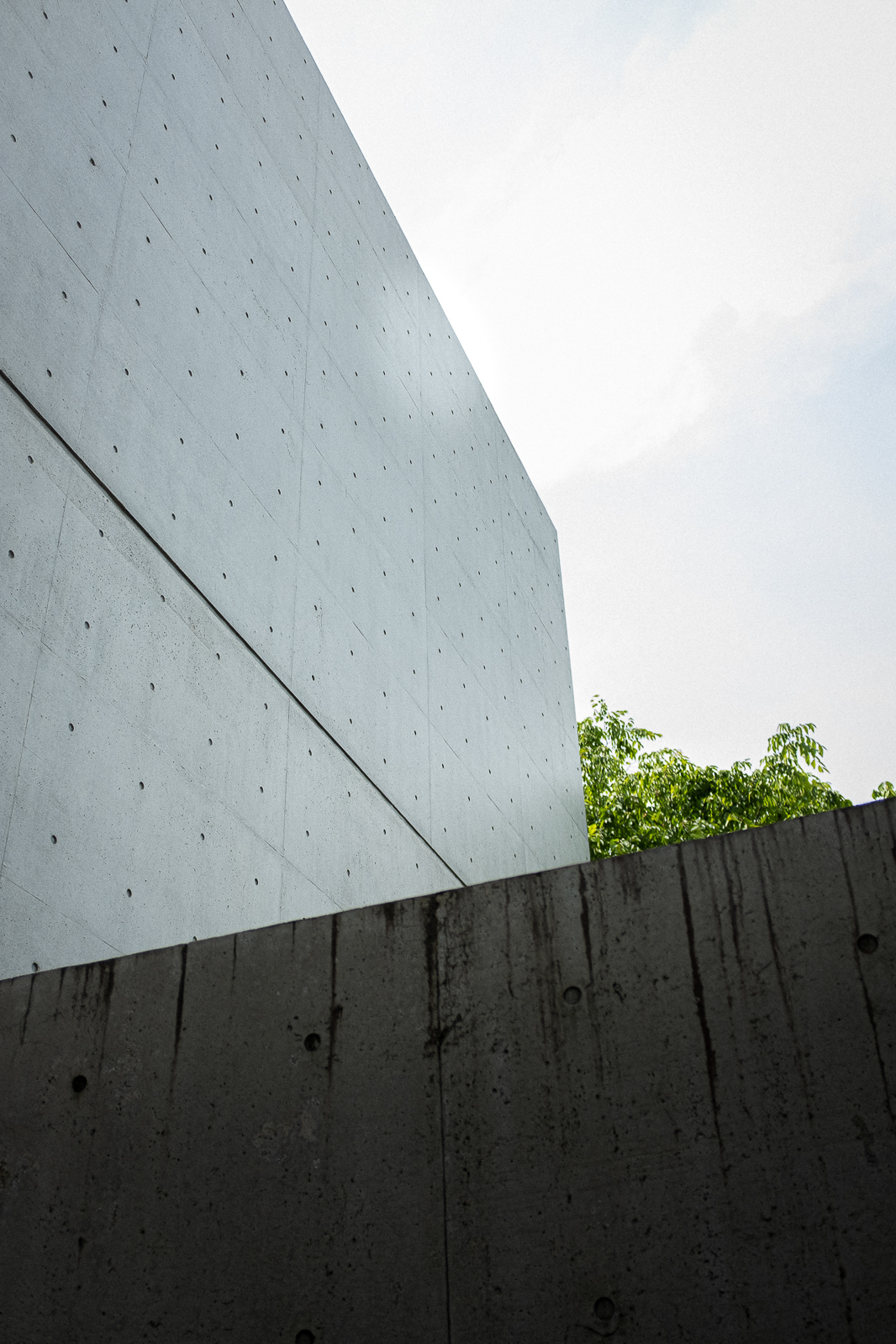 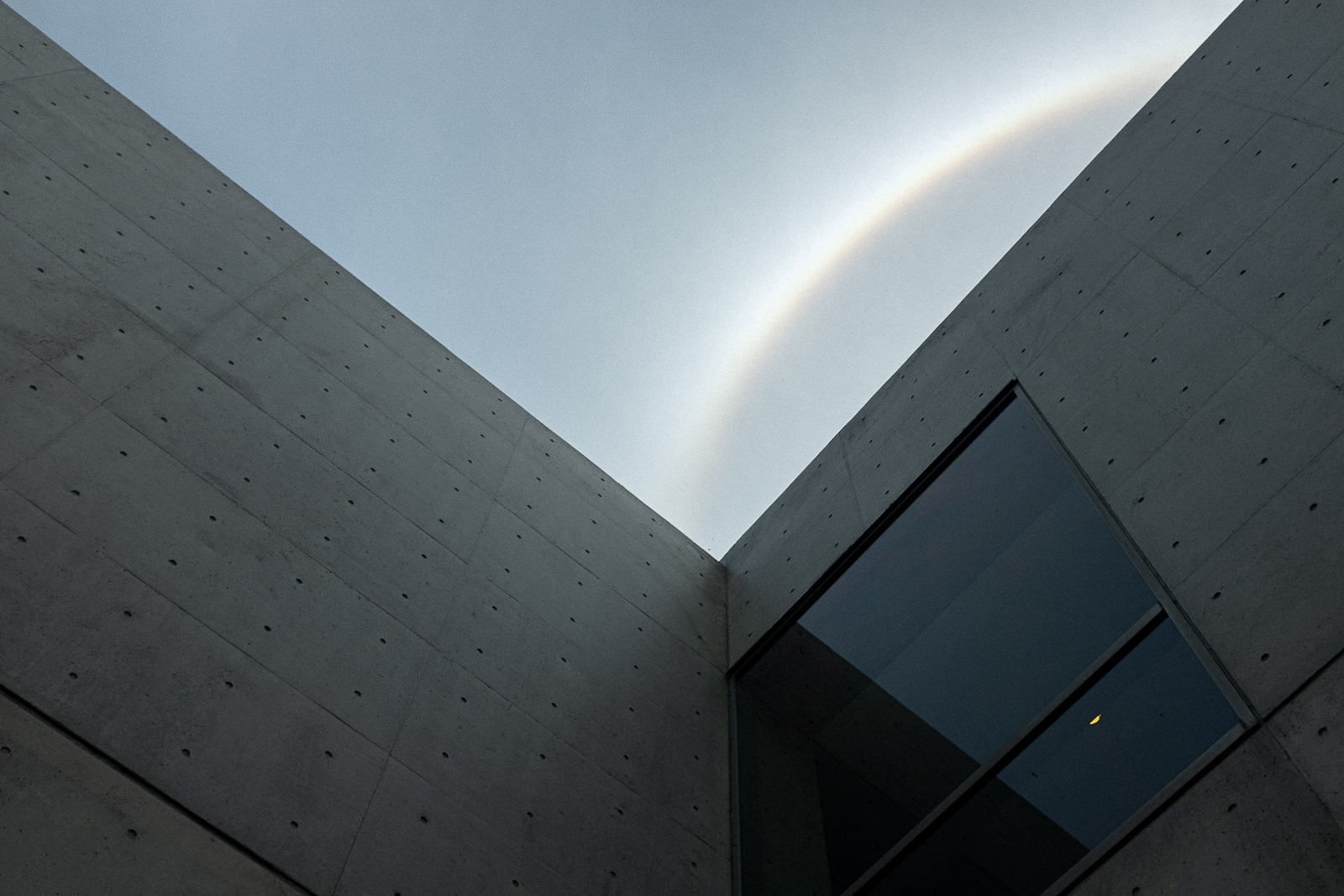 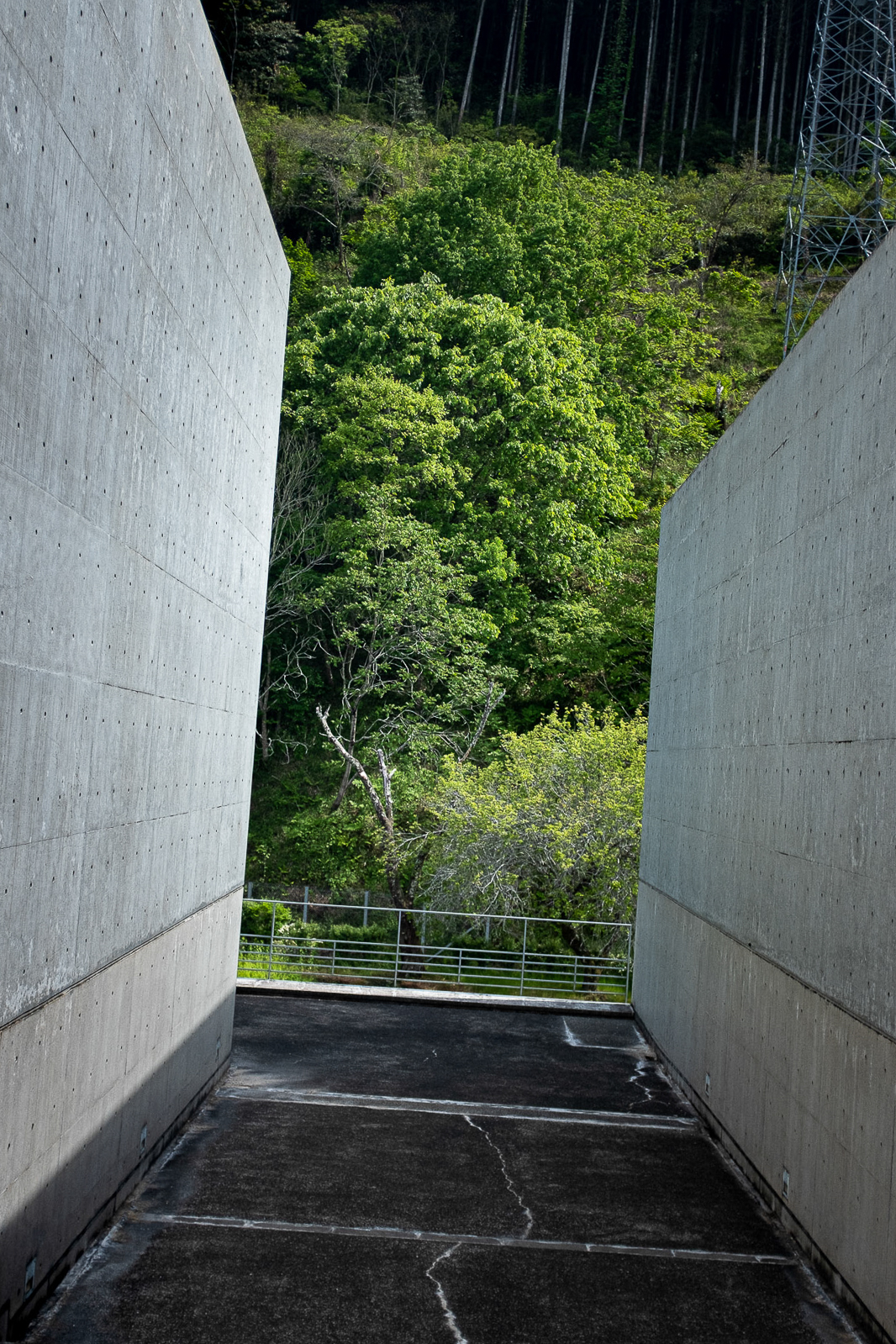 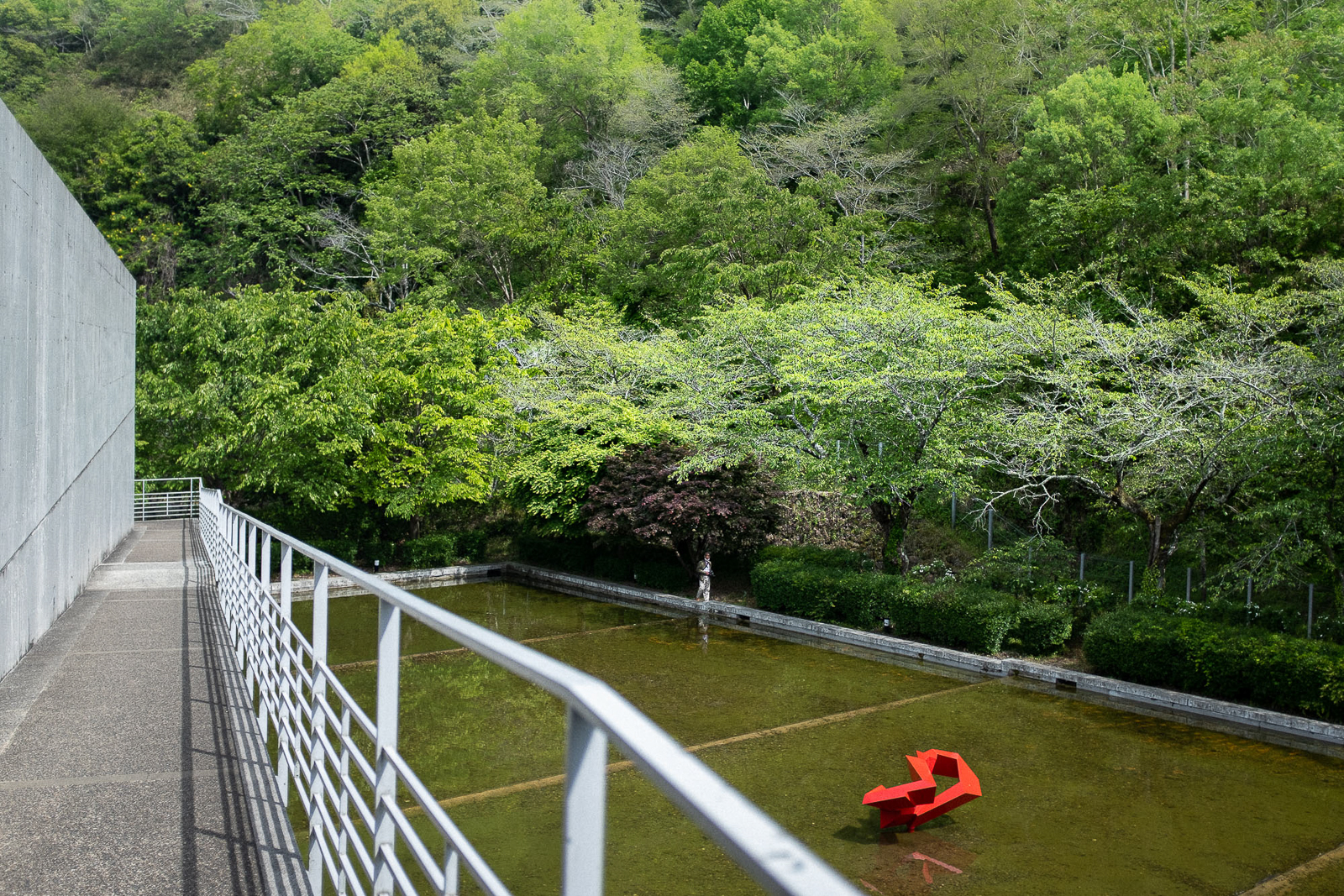 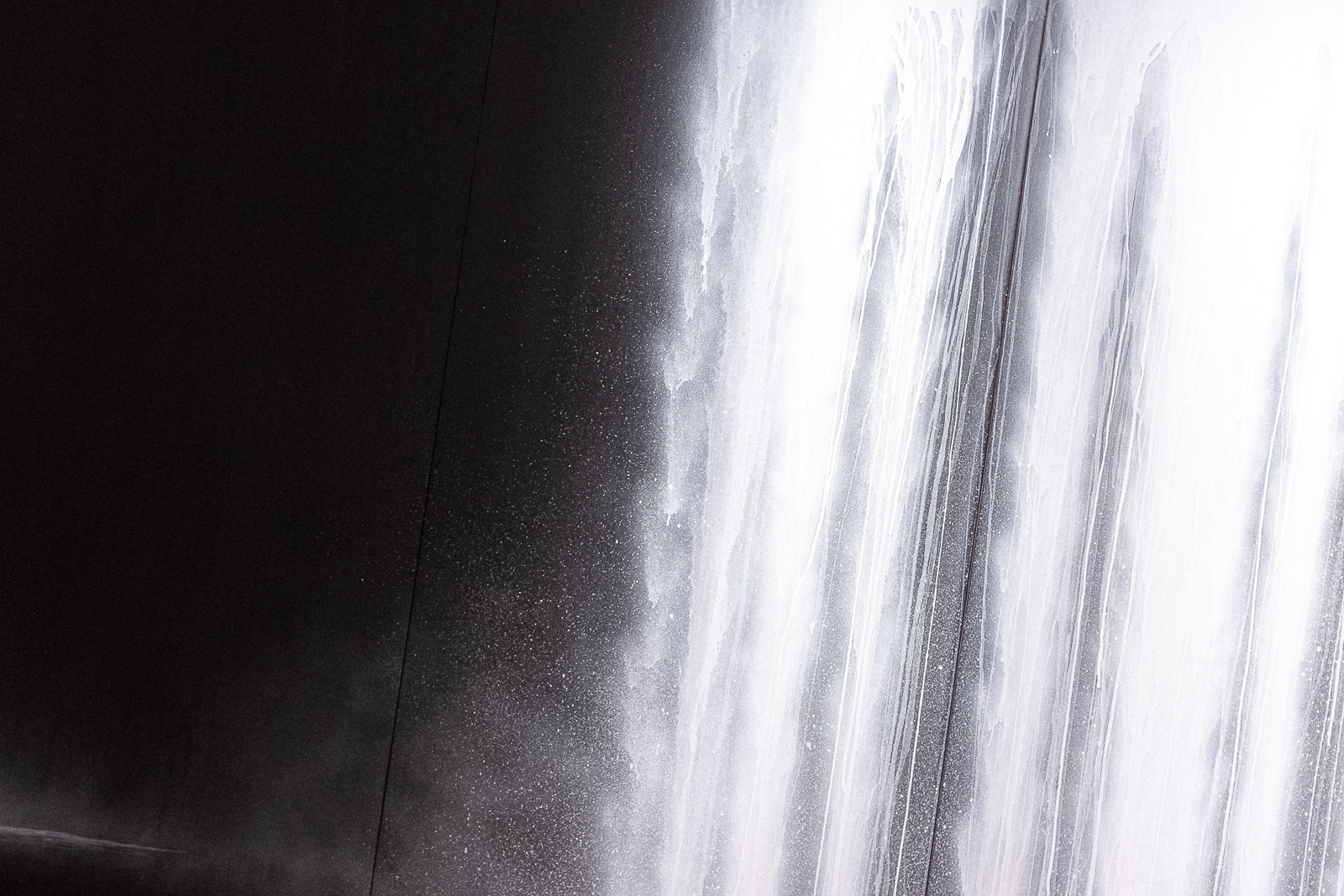 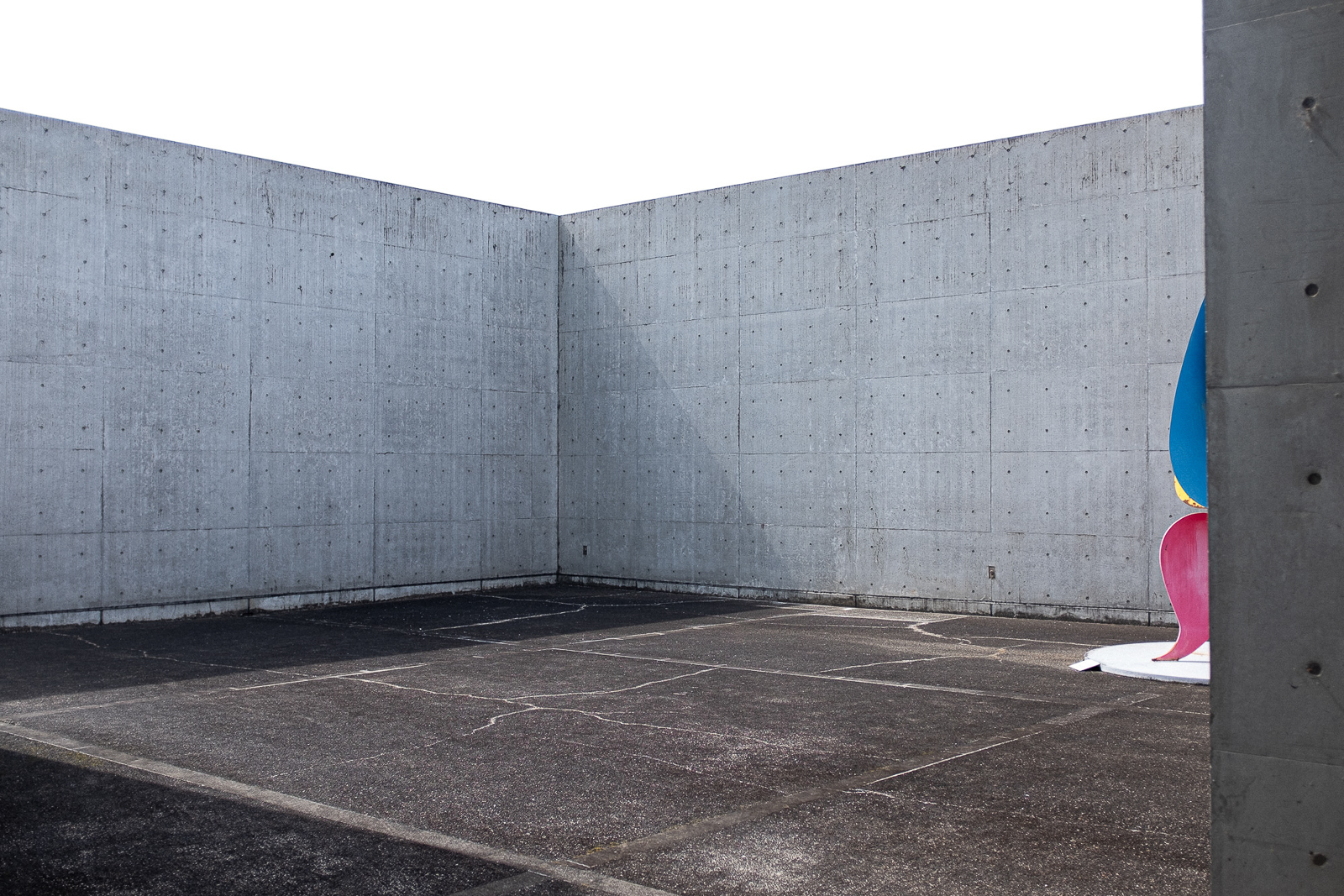 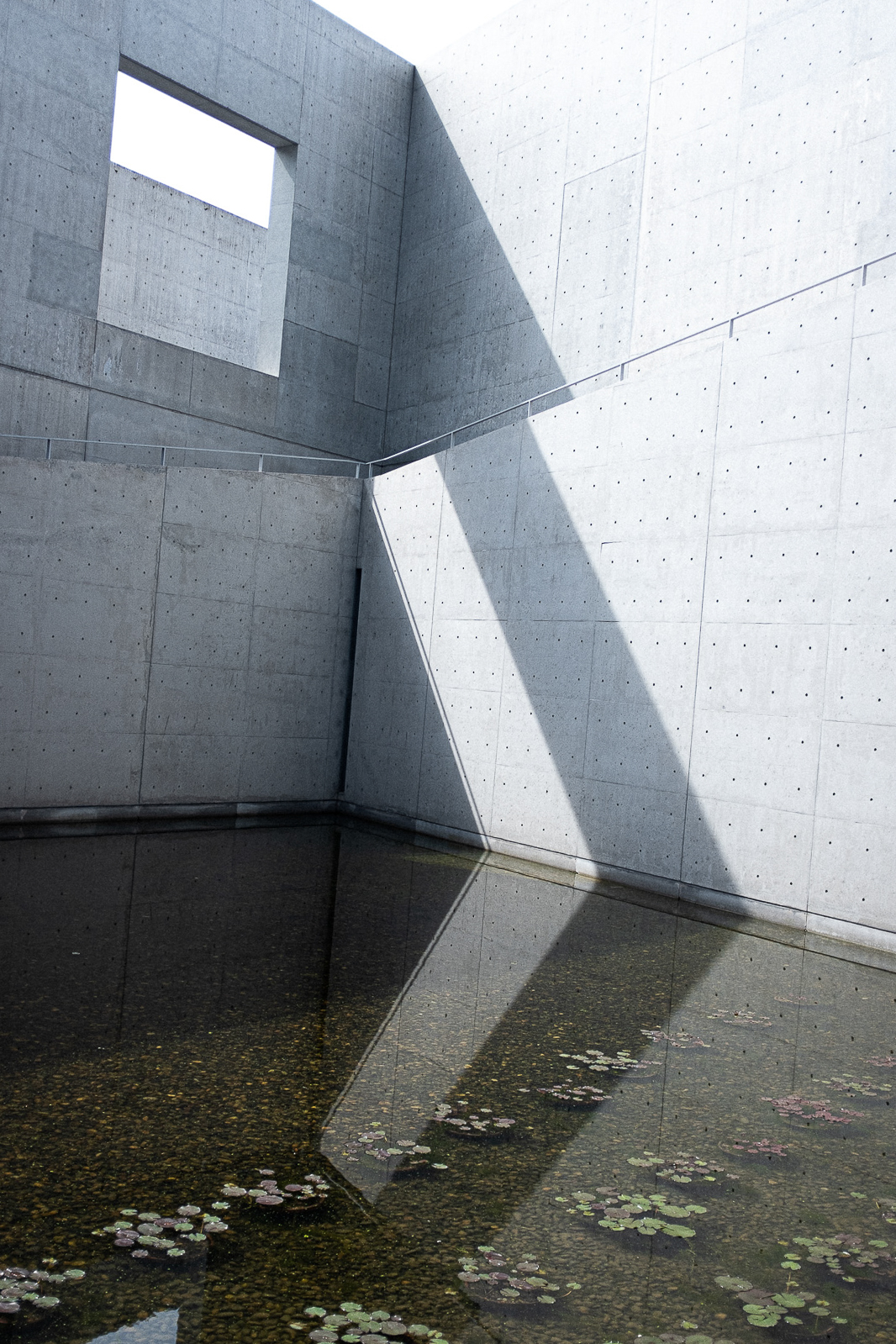 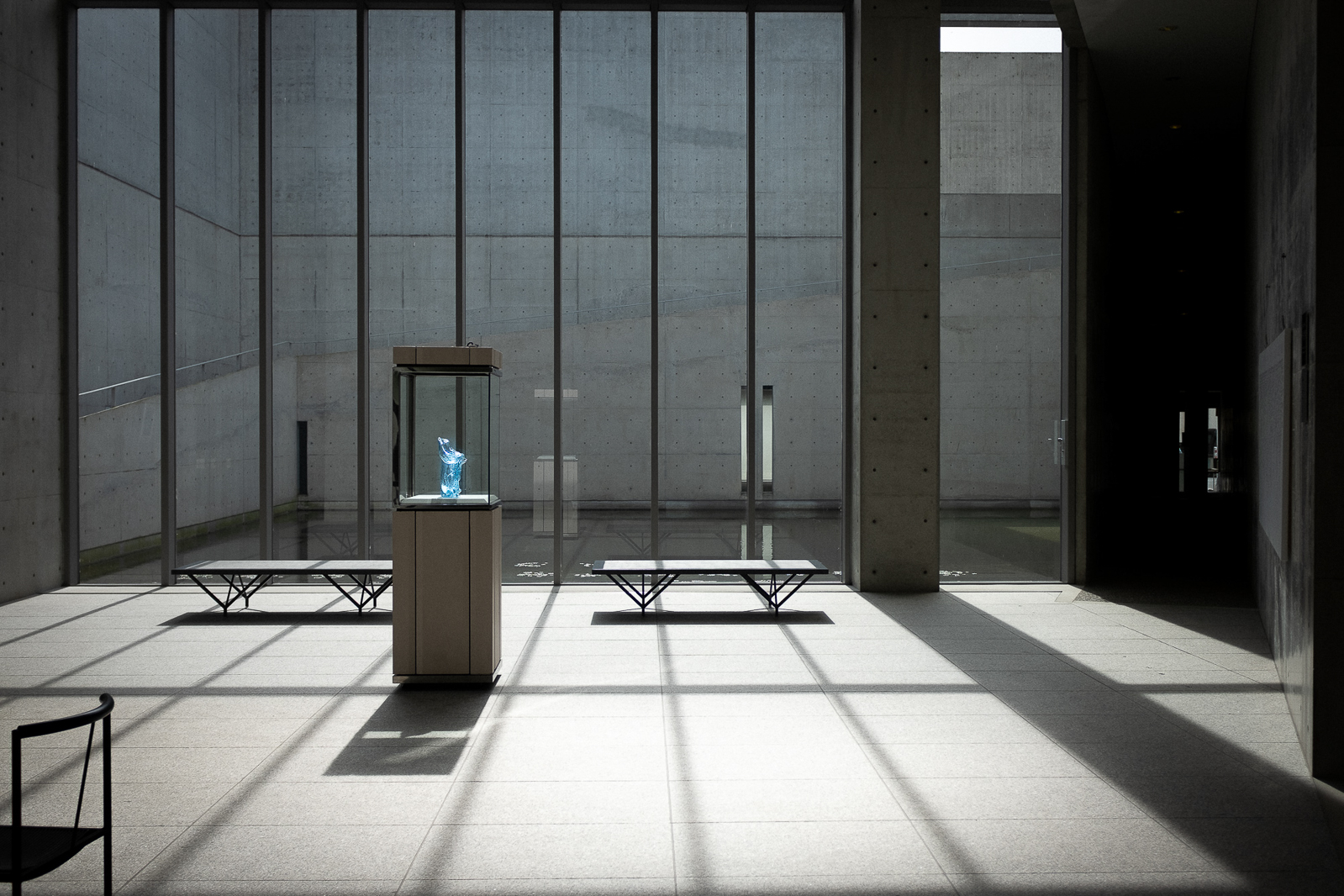 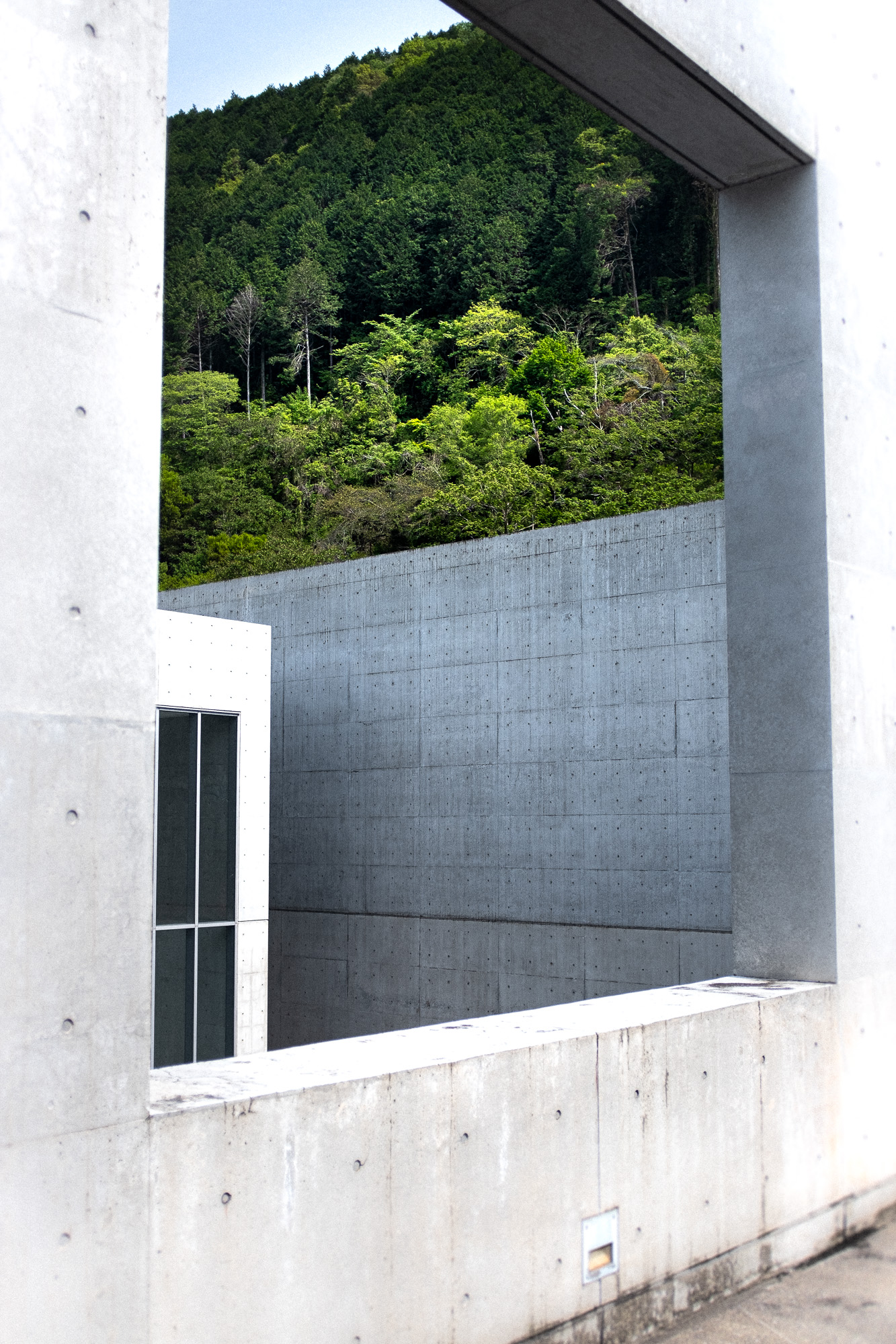 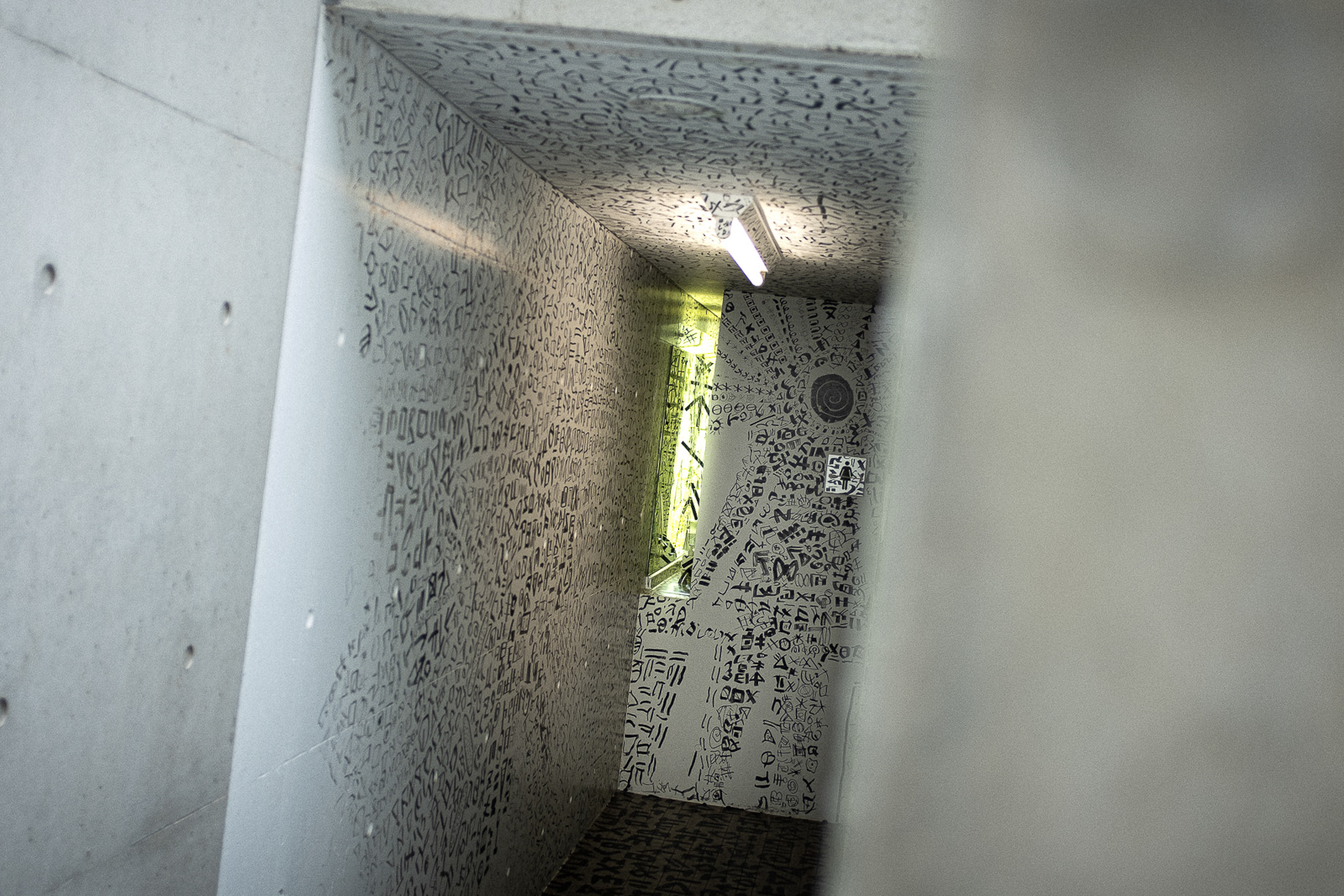 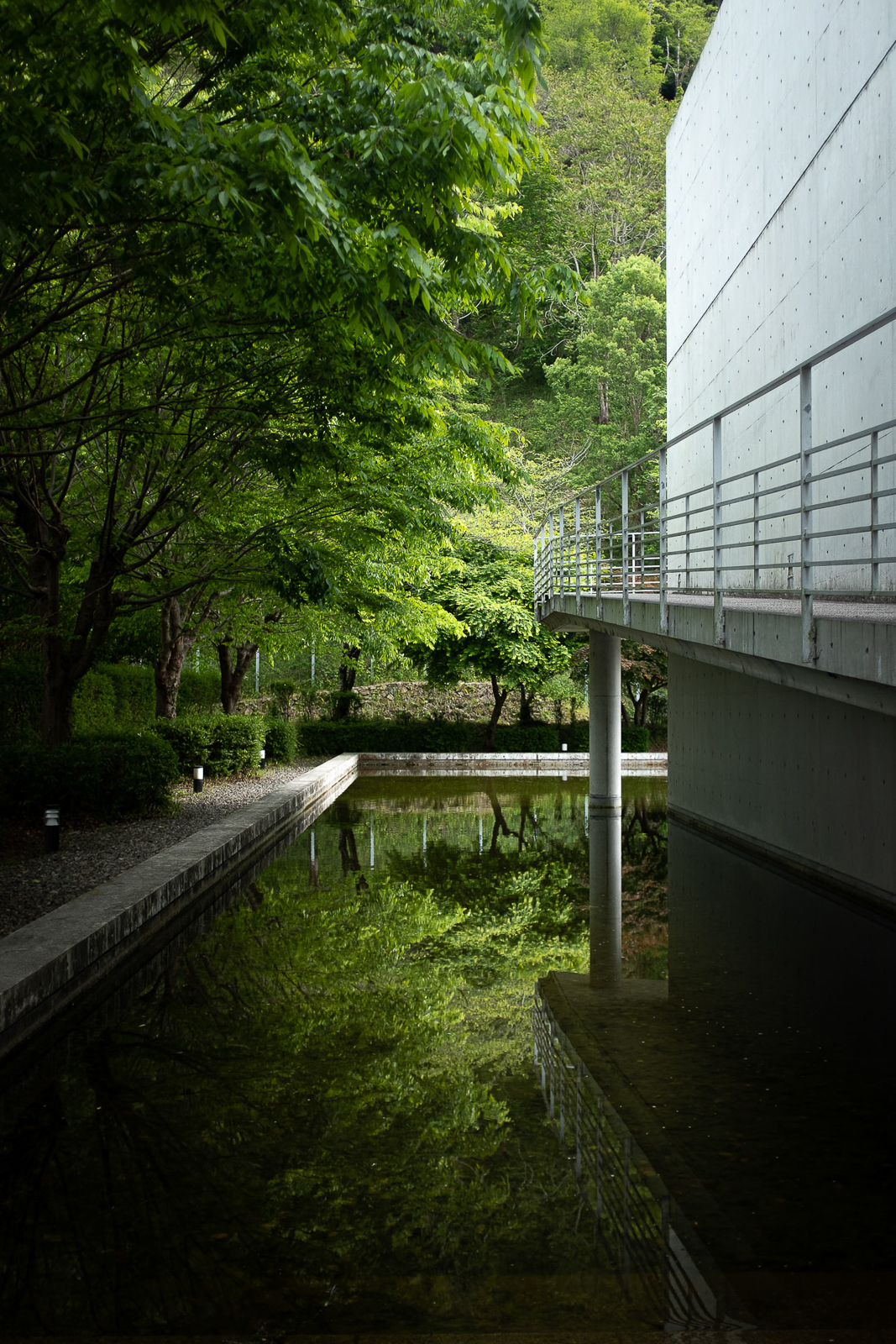 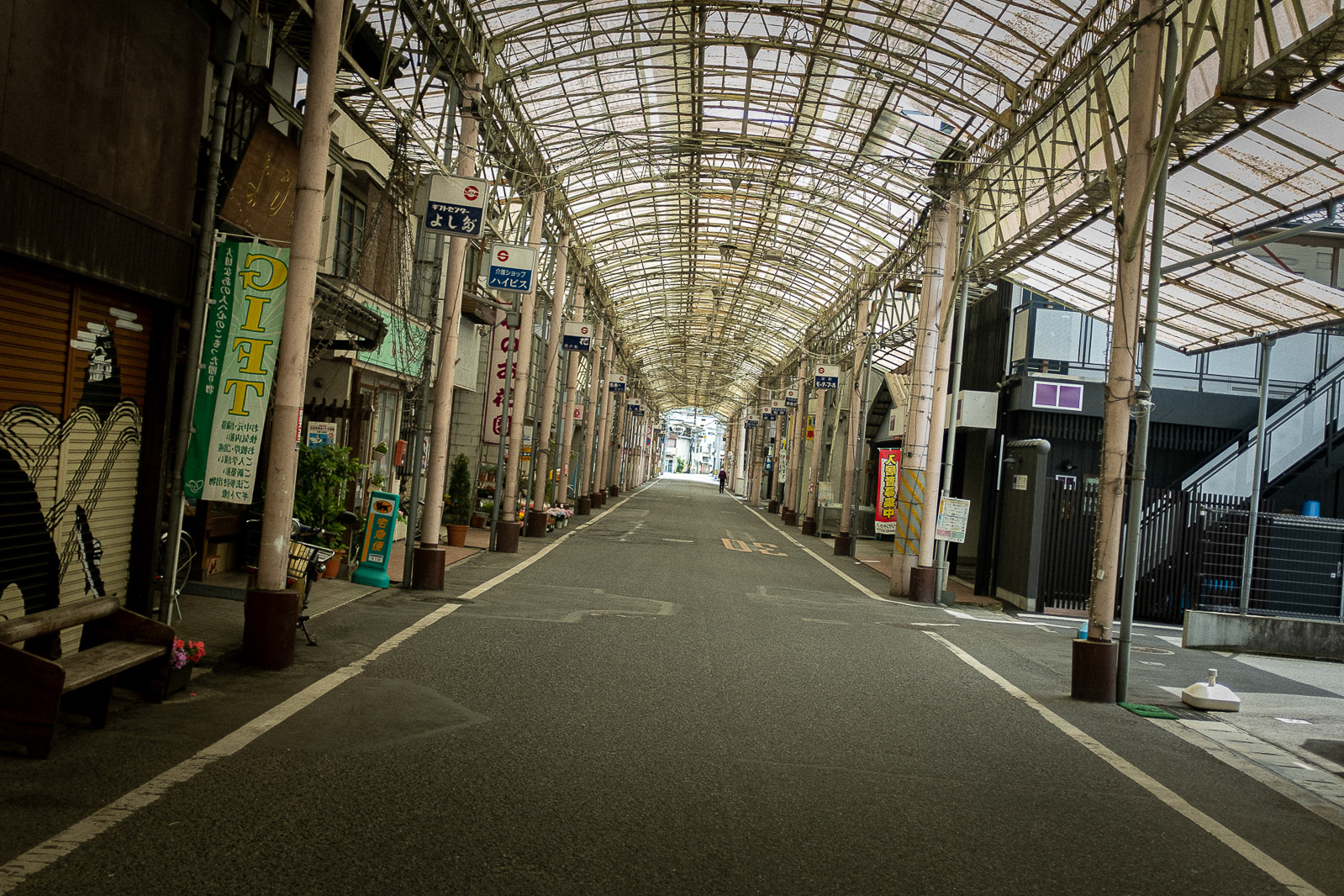